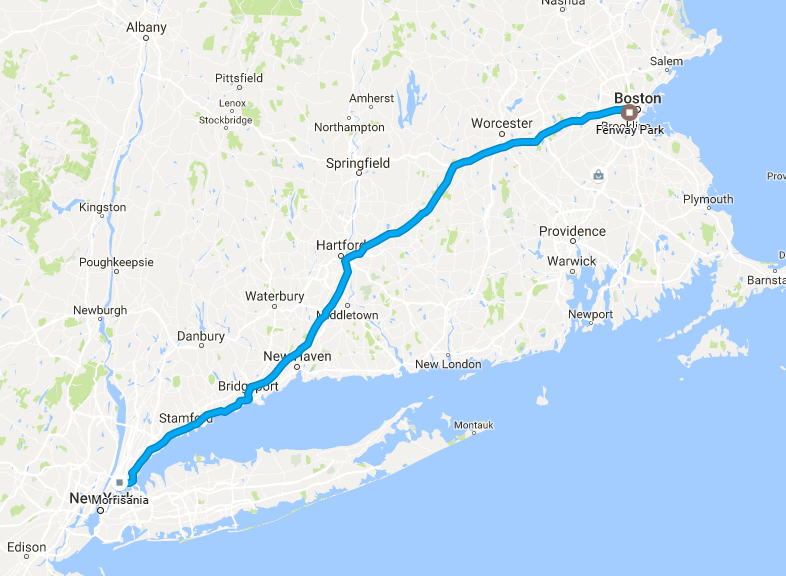 While we had taken day trips to locales here and there prior to the birth of our daughter in 2012, this vacation to Boston in July 2013 counted as our first official family vacation. We left our house in the Bronx around 8:30am, heading towards Brookline. Brookline is a town in Norfolk County Massachusetts just south west of the famous Back Bay. We planned to make the most of our first trip to Boston: the famous Duck Boat Tour, the Museum of Science, and catching a game at Fenway Park. Yes, we’re from the Bronx but are Mass fans across the board: Red Sox, Patriots, Bruins, Celtics – and Revolution. With tickets and itinerary in hand, we piled into our rented 2012 Chevy Equinox and off we were.

We had planned a small pitstop for breakfast and Orem’s Diner in Wilton, CT – just north of Norwalk, CT. Absolutely the best fried calamari around, or so we had heard. Unfortunately, we were unable to go this time around – though, on our day trip to Lawrence, MA for a birthday in August, we did stop here and were proven correctly: best fried calamari. We ended up grabbing lunch at a McDonald’s and going from there. Our drive was fairly uneventful, and we got to our Holiday Inn Express in Brookline just before 1pm. Not bad for a pitstop here and a pitstop there. We then shucked all of our stuff  into our hotel room, and grabbed a cab (thanks to Hailo) over to Fenway Park.

We were set to watch the Red Sox vs San Diego Padres game at 1:45pm on July 4th. We ended up winning 8-2, and had a great time.  Granted, the munchkin was not having it with the heat that day (high of 94F).

With our first Red Sox game under our belts, we headed back to our hotel to cool off and relax for the evening. One thing you’ll notice with us on vacation – contrary to most people on vacation, we try to do at most 2 to 3 things a day, or less. After all, a vacation is supposed to be relaxing – not a mad rush to see 50 things in one day. At least, for us.

The day after, we drove up to Lawrence, MA – where we picked up two family members and drove up to Salem, New Hampshire. This is not the “Witches” Salem – rather, we visited a child friendly amusement park here – Canobie Lake Park. Rather unfortunately, our daughter was still a bit too young for the majority of the rides here. First time parents, and all.

The next couple of days we did the Boston Duck Tour, where we saw quite a few places. But first, our seats were right behind the driver, so we had a fantastic time:

We were treated to quite a few sights…but me being me, and knowing my sophomoric humor – this made perfect sense for a photo op: General Hooker Entrance (go on, chuckle):

Right opposite General Hooker Entrance (heh) is the Old State House (and current State Library). We also had the pleasure of seeing the oldest church in Boston – Old North Church. Though, I wasn’t able to get a clear shot of it. Speaking of old – we saw the Old City Hall and old Trinity Church in Copley Square – which was destroyed in 1870 to relocate it, and rebuilt by 1872 on a lot enclosed by four public streets – the only such locale that offered this amount of visibility to the church. Later that same year however, the Great Fire of Boston burned the second church down. A carved granite stone from the facade of the burned church is preserved to be installed in the cloister wall – which can be seen from the Clarendon street entrance. By 1876, the newly rebuilt building (as seen) is finished.

And lastly, in our tour of Old  – Ol’ Ironsides – USS Constitution. Now, a history lesson courtesy of Wikipedia (Remember to donate to support this wonderful archive of human knowledge and history):

USS Constitution is a wooden-hulled, three-masted heavy frigate of the United States Navy, named by President George Washington after the Constitution of the United States of America. Constitution is the oldest commissioned warship afloat in the world. Constitution was launched in 1797, one of six original frigates authorized for construction by the Naval Act of 1794 and the third constructed. Joshua Humphreys designed the frigates to be the young Navy’s capital ships, and so Constitution and her sisters were larger and more heavily armed and built than standard frigates of the period. Constitution was built in the North End of Boston, Massachusetts at Edmund Hartt’s shipyard. Her first duties with the newly formed U.S. Navy were to provide protection for American merchant shipping during the Quasi-War with France and to defeat the Barbary pirates in the First Barbary War.

Constitution is most noted for her actions during the War of 1812 against the United Kingdom, when she captured numerous merchant ships and defeated five British warships: HMS Guerriere, Java, Pictou, Cyane, and Levant. The battle with Guerriere earned her the nickname of “Old Ironsides” and public adoration that has repeatedly saved her from scrapping. She continued to serve as flagship in the Mediterranean and African squadrons, and circled the world in the 1840s. During the American Civil War, she served as a training ship for the United States Naval Academy. She carried American artwork and industrial displays to the Paris Exposition of 1878.

Constitution was retired from active service in 1881, and served as a receiving ship until designated a museum ship in 1907. In 1934, she completed a three-year, 90-port tour of the nation. Constitution sailed under her own power for her 200th birthday in 1997, and again in August 2012 to commemorate the 200th anniversary of her victory over Guerriere.

Prior to our Duck Tour, we took a small walk through of the Museum of Science in Boston. We had a wonderful time. Although, we did not take any pictures. Also, our munchkin was far too young to truly enjoy and understand all the wonderful stuff there. Only reason we went was because we had time to kill before loading our Duck Boat right outside the museum, but it was totally worth it. The cafeteria at the MoS is pretty good too.

The day after, we took in a bit more sightseeing – though, from a bit further up: The Skywalk at the Prudential Tower, Boston.

Our drive back was fairly also uneventful thankfully.